What if you could transform our schools for only $1 a month? 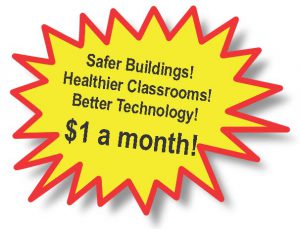 On Thursday, Nov. 2, the BKW community will decide the future of the district when they vote on two propositions that would total $19.8 million in renovations and improvements to its school buildings: Proposition #1 – $14.8 million in repair and modernization work primarily in the Elementary School.

Proposition #2 – Approximately $5 million in improvements to the Secondary School, focusing on technology infrastructure, security, and site enhancements around the district. This proposition would be contingent on the passage of the $14.8 million proposal.

The first part of the equation is state building aid, which would pay for approximately 80 percent of the proposed project. State lawmakers recognize that many capital expenditures would be next to impossible to pay for out of a district’s annual operating budget. Because of that, they have long offered financial incentives in the form of state building aid for school districts to take care of their facilities through capital projects.

The second part of the equation is the strategic use of reserve accounts. With state aid paying for approximately 80 percent of the proposed project, the remaining cost will come from existing reserves that have been created for such expenses. The next part of the equation is retiring debt. In 2020, we will pay off a 2005 project bond. By 2026, the remainder of construction bonds for the 2012 project and an EPC bond will be paid off. We would begin paying on the new project in 2021.   In the years 2021 to 2025, BKW will apply reserves each year to reduce the local share of the total debt during the years of overlap between old debt and new debt. The result will be a $12 dollar per year increase for five years, and then a reduction to $4 in the sixth year, for a total of $64 over that period of time. That is just $1 dollar per month for 64 months, and then zero impact to the taxpayer for the remaining twelve years of the bond cycle of this project.

“With a strong rate of state aid for capital projects, combined with strategic use of reserves and utilizing favorable interest rates, we are in a position to limit the tax impact of this project to our community. We will be able to continue the financial stability that we’ve established the past few years,” said Dr. Timothy Mundell, noting the tax levy has increased only 0.5 percent over the past six years.  “That’s how we would be able to provide safe, modern facilities that align with our academic vision for only $1 a month.”

Eligible voters are encouraged to vote on Thursday, Nov. 2, 6 am to 8 pm, in the secondary school auditorium.

Additional information about the proposed project is available on the district website, www.bkwschools.org, and the district’s Facebook page, www.facebook.com/BerneKnoxWesterlo.

And we’re always listening. If you have a question or a comment about the proposed facilities improvements, please send us an email.