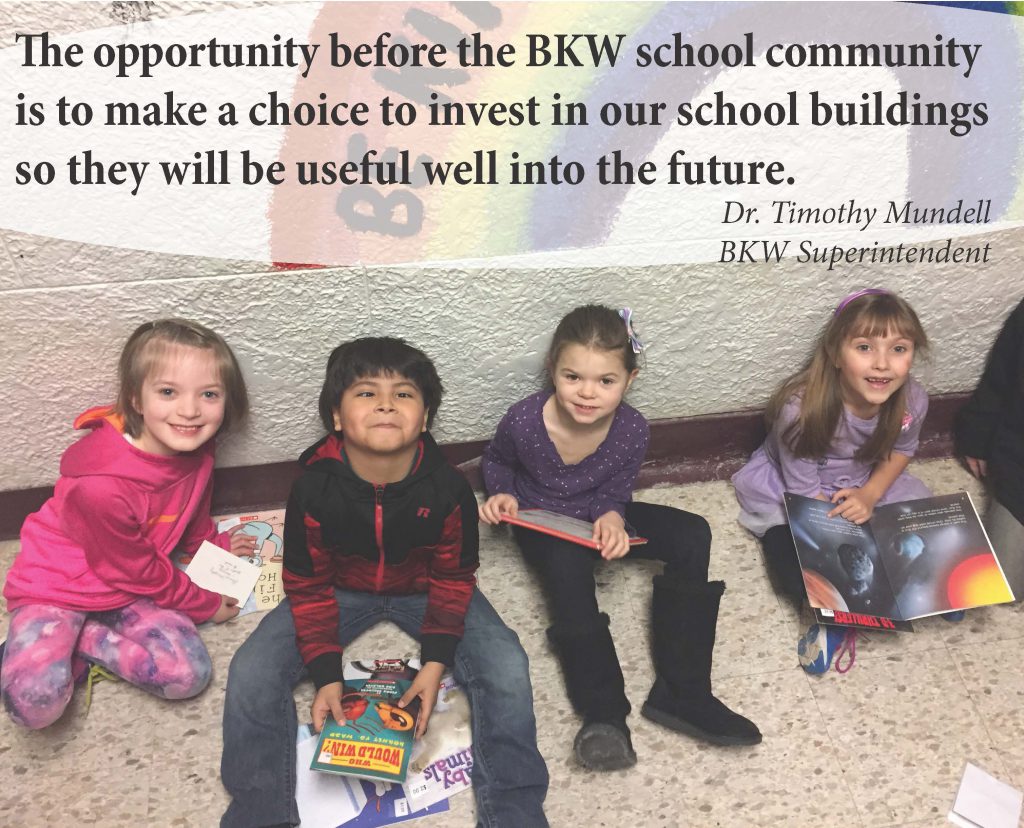 In 1996, Penn State University published a study through its Evaluation and Education Policy Analysis department which highlighted the existing state of public school facilities across the nation. The study pointed out five key understandings:

As the world became more digital and technology based, the task of fixing and upgrading schools to meet the challenge of the future was daunting financially and strategically. In 2000, New York State passed legislation and adopted regulations creating a required reporting process for local districts to identify the major facility maintenance and improvement needs as a means to planning for cost and priority over time. As a result, local districts are required to submit a Building Condition Survey to the New York State Education Department every five years to identify structural and/or mechanical issues that will lead to structural or mechanical system failure within five years. It is the expectation that these identified facility maintenance issues be addressed as a priority by the local district as soon as practical.

To date, NYS has been through two five-year BCS submission periods. During the first five year period, running through June, 2011, there was a clear trend by local districts to submit capital improvement projects focused primarily on fixing broken systems in school buildings. The conservative approach by districts may reflect the urgent need to overcome a back log of delayed repairs, and also may reflect the stagnant economy of the time.

During the second reporting period, through June, 2016, districts have sought to conduct capital improvement projects which not only included addressing BCS identified issues, but have also included innovative plans to re-define the capacity of their local facilities to meet the changing needs in education today. It is here where the Berne-Knox-Westerlo Central School District enters consideration of the status of its local school facilities, necessary maintenance, and innovative improvements.

A brief synopsis at BKW

In May, 2015, The Berne-Knox-Westerlo Board of Education hired an architectural firm, Synthesis, LLP, for the purpose of conducting the required Building Condition Survey for submission to NYSED by June 30, 2016. Throughout the course of the 2015-16 school year the firm worked closely with the District to assess the condition of district facilities. In addition to the BCS work, the architects were tasked with developing a five-year facility plan. Parallel to collecting necessary information for the BCS, the architects met with administration and staff to gain insight related to program and instructional needs that could support the development of the five year facility plan.

The architects provided updates on BCS items to the Board of Education on several occasions during the 2015-16 school year. The BCS was submitted prior to June 30, 2016, and a facility plan was developed and presented to the Board, in the context of the BCS work, in November, 2016. From November, 2016 through May, 2017, The Board worked with the architects to define a scope of the work to be included in a capital project proposal for a public referendum anticipated to take place in the fall of 2017.

It is noted that the District has conducted two prior capital projects during the BCS era in NYS, one approved in 2005, and another approved in 2010. Both projects focused predominantly on the Secondary facility and included improvements to comply with Americans with Disabilities Act requirements, as well as improving athletic and cafeteria facilities.

A copy of the BCS results can be viewed on the District website. Suffice it to say for this paper, the items identified in the BCS are overwhelmingly located at the Elementary building, as this facility includes sections that were constructed in 1932 and 1955 and have systems in need of major repair, or replacement altogether.

Rather than a simple listing of projects to be addressed, the facility plan organized the projects into four general goals- infrastructure, safety and security, educational program, and organization. While addressing the infrastructure issues it is also possible to improve and enhance the facility to re-define the capacity of the facility to meet the changed needs of education in the 21st century.

The scope of the proposed capital project includes replacing the heating system by converting from a steam system to a hot water system, replacing roofs, improving the ventilation system, addressing septic system issues, electrical issues, new lighting systems, and adding acoustic padding for noise reduction. Beyond the Elementary building, there is roof work to be completed at the Secondary school, as well as electrical issues and fuel storage issues at the district office facility.

Concerns have been expressed by the community regarding secure entry points of each of the buildings. The Board members, a group of community members, administration, and the architects conducted a walkthrough in January, 2017, to identify potential options for enhancing security in each. Options have been developed, and included in the proposed cost.

The scope of the proposed project also reflects a STEAM oriented academic approach to program and instruction, and an effort to create community spaces to enhance the District’s role in serving as an agent of community engagement. The project will modernize and enhance classroom space to allow for flexible instructional practice, teamwork, collaboration and hands-on, project-based learning, while also improving the air quality, temperature control, lighting, acoustics and color schemes of each learning space. The project will include a 21st century science instructional center and enhancements in the cafeteria space that will allow it to more readily serve as a large group instruction space or a well-equipped public meeting space. Similar enhancements to the secondary cafeteria will also be part of the project. While classrooms are under renovation, technology infrastructure will be addressed, including wiring for increased speed and capacity on our local network, the addition of wireless access throughout the school, and the inclusion of a state of the art projection system in each classroom.

The scope of the proposed project at BKW reflects the current trends proposed by districts in NYS. By combining major infrastructure work with a comprehensive plan for the future of program philosophy and instructional practice, districts are optimizing the intersection of NYS provided building aid on capital projects and the current economic climate of very reasonable interest rates for bonds to cover the cost of the projects. The proposed project at BKW is one that will extend the life expectancy of the major systems of the facility for foreseeable future, while also ensuring we are preparing students for their future.

According to feedback from an exit survey regarding the proposed capital project, conducted by the District at the annual budget vote on May 17, 2017, 89% of respondents agree that BKW facilities are in need of improvement, and 47%  would like a better understanding about the connection between improved facility condition and student performance. Over the past ten years studies have been conducted to better understand the relationship between facility conditions and student performance. In fact, over sixty years of research continue to support the positive relationship between building quality and student achievement. (Cash & Twiford, 2010).

In their 1996 study, Penn State noted a key finding to be that facility quality is a predictor of student performance and teacher retention. Poor environments in schools adversely influence the health, performance, and attendance of students (Building Minds, 2006). Duran-Narucki’s 2008 study of school building condition, attendance, and academic achievement in New York City found building conditions to be a predictor of student attendance and student achievement on standardized tests.

Several studies have been done in an attempt to determine exactly how building conditions impact student performance. National Summit on School Design (NSSD) reported eight recommendations for school design excellence. These included designs to support a variety of learning styles, and the creation of healthy, comfortable, and flexible learning spaces. While the cumulative effect of the school facility’s condition has been related to student outcomes, further research has been done to pinpoint several specific factors that contribute to this overall phenomenon. These specific factors include lighting, building cleanliness, health and safety, painting, and student and teacher morale. NSSD (2005) recommendations include several references to heating, ventilating, and air conditioning systems to counter those concerns. They indicated that industry trends affecting quality of the school environment included temperature distribution monitoring that can control and track temperature in all spaces in school buildings, and improved air filters for a healthier environment.

Research has indicated that controlled day lighting and appropriate artificial lighting improve the performance of students and teachers and their health (Woodside, 2008). Research by Conway, Epps, and Plympton (2000) supported the relationship between lighting and student test scores and health. They further reported that schools found increasing natural lighting in construction did not necessarily increase the cost of construction or operational costs. Heschong-Mahone Group (1999) reinforced the positive effect of day lighting in student performance.

Penn State identified five facets of school facilities that are important to supporting student performance. These include:

Less external noise has been associated with greater engagement and achievement

3)      Lighting- Research has shown that artificial lighting has a negative impact on those in school. Natural light has a positive effect. Natural light boosts morale of staff and students, reduces off task behavior, and improves test scores. Natural light leads to 20% quicker math growth and 26% quicker reading growth

• Recommendation: Control temperature in individual rooms, or at least within a small block of rooms

5)      Classroom size and space- Overcrowding is linked to increased levels of aggression among students. Overcrowding is associated with decreased levels of engagement and learning. Rooms must have ample space to be conducive to appropriate learning activities- 21st century work, teams, problem-solving, and communication. Rooms must allow for re-configuration of seating, including private study areas, small group learning centers, and reduction of audio and visual interruption.

We can draw a conclusion that by repairing and/or replacing mechanical and structural systems, the district will improve the condition of the facility. According to the research, the improved condition will directly relate to improved student performance and improved morale among students and staff. Repair or replacement of systems in these areas is a worthwhile investment to maintain the useful life of the building, as well as to provide a healthy learning/working environment for students and staff, while adapting to the changing future in education practices.

A symposium held in California in 2008 entitled, Re‐Visioning School Facility Planning and Design for the 21st Century: Creating Optimal Learning Environments, outlined “A Framework for School Design Excellence.” It is offered here as a practical reference point in thinking about the proposed project as it relates to improving student performance.

The opportunity before the BKW school community is to make a choice to invest in our school buildings so they will be useful well into the future. The research provides us with understanding about how to invest resources to ensure that the structure in which students learn, and teachers teach, indeed supports optimal performance. The District has the opportunity to not only fix mechanical and structural issues in the elementary facility, but also create a learning environment aligned with current and future trends in teaching and program design. Doing so will contribute to preparing students for their future.

Hechong-Mahone Group. (1999). Daylighting in schools: An investigation in the relationship between daylighting and human performance. Fair Oaks, CA.